Welcome to the team Jack! 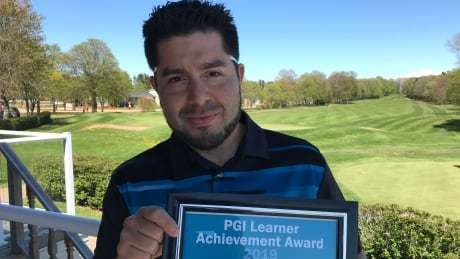 When Brandon Solomon was asked to write an essay in a Grade 11 science class, he couldn’t do it.

He decided to leave school and says for years he struggled to read and write. After working and helping raise a family, he decided it was time to improve those skills.

So he went to the P.E.I. Literacy Alliance for help, and this year he received the Learner Achievement Award at the Peter Gzowski Invitational Golf Tournament at the Belvedere Golf Course in Charlottetown.

It’s a long way from that “scary” moment in Grade 11 when he was asked to write an essay and read it in front of the class.

“I wasn’t confident enough to be able to do that,” he said.

Solomon said he somehow made it to Grade 11 despite poor literacy skills.

“I remember a teacher telling me that as long as you show up for class we’ll give you a passing mark,” he said. “So if that’s not a good enough idea of how the schooling was for an Aboriginal student like me, you basically use the tools that you have.”

Solomon, who grew up in New Brunswick, and now lives in Point Prim with his partner and children, said he doesn’t remember being read to as a child.

But he said he’s read more books and magazines in the past year than he had in the previous 32 years of his life combined.

“This is a huge impact on my life. It’s a good feeling. You can never feel bad about that, that’s for sure,” he said.

“You’re ready when you’re ready, I guess, and that’s where I’m at right now. I’m ready to just want to read more and progress through this program even better.”

He said his next goal is to get a GED.

“I want to be able to accomplish that for me, for my kids, I just want to do the best I can,” he said.

“Everybody has a weakness and they struggle with it every day and not being able to read is pretty traumatizing when you’re growing up. You don’t want anybody to know that and you’re trying to keep it hush, but you just go do it, what’s good for you and your family. And I find this is good for me.”